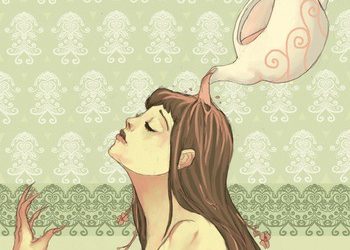 And there she was, standing there alone. Her almost expressionless face was always something challenging. But whatever you did, she would still sit there and remind you of her magnificence. Where all this pink liquid came from anyway? How did she become like this? The endless hand holding the cup and the unstoppable pinkish water coming out of it were since forever wonders to my eyes. I was, you see, just another viewer in this girl’s life.

It all begun when she was young. Her parents worked in the circus: her mother as the glamorous, talented acrobat who could seduce anyone with her amazing skills and her father as the animal whisperer who could make any wild lion or elephant obey his every move. You see, when Estella was young, that was this girl’s old name, her parents soon realized she didn’t actually have any particular talents. She would train on the acrobatic rope for hours, falling and standing up again and again. She wanted to be like her mother, beautiful, magnificent and gorgeous. But yet, she couldn’t. She forced her body and soul for years to something that was obvious not her destiny. Soon enough she discovered a great love of hers. Instead of actually trying to make all animals obey her, like her own father did for years, she was extremely talented in taking care of them. Feeding them every day, taking care of their small beds, their own space, making everything she could do in order for all the animals to be comfortable and healthy. And they loved her. Oh, they loved her so. They would travel all together, when there were no shows booked, and all the animals, wild or not, would make her life so meaningful and amazingly beautiful, she was convinced that the world consisted only of nice things.

But one day everything changed. One day her whole world would collapse under the pain of loss, death and loneliness. It begun as smoke. Her parents had this small caravan where they were living all together. She must have been around 7 or 8 years old. What appeared to be a daily task, soon proved to be something bigger. She was outside playing with some kittens when she saw the smoke. Since they didn’t really have many workers in the circus, nobody was there to warn her or her parents for the forthcoming destruction. Soon the fire spread, but Estella couldn’t realize that something was wrong. She thought her parents were experimenting with new tricks. But she was so wrong.

Hours after the accident, Estella woke up some meters away from the caravan, like something had pushed her away. Dizzy as she was, it was difficult to realize what had happened. When she stood up from the ground, she heard this annoying noise in her ears. All her body was shaking and she couldn’t really recognize where she was. Some minutes later she understood. She understood because she saw them. The two bodies of her parents were laying down in front of the caravan. Frustrated as she was, she wanted to scream but she realized no voice could come out of her. There was no sound she could make. Nothing. Her tears soaked the ground around her and covered the burnt bodies of her dear mother and father. She cried and cried for what felt like centuries. The animals around her starting making sounds and grieving with her. Some were hurt and some scared. But they all came in her weeping call and spread around her. Elephants and lions, monkeys and kittens, ducks and giraffes. The whole nature was crying along her side, reminding her that nothing is gone. Nothing is lost. That they are here for her and will for ever obey her.

She stood up and looked around. Her eyes were dry now and soon she felt something inside her. It was the power she was hiding and was waiting the proper time to emerge. It was this talent she thought she never had. The tears from the ground starting to change. They were moving backwards to the place they came from. Their color was becoming this soft pink and soon she was changing. She was transforming through grief to the fairy she was always destined to become. All those years she was thinking that she was useless and nothing could become of her. But now she knew. So did the animals around her. The liquid was emerging from the burnt ground and was becoming a small tornado surrounding her. It covered her whole body till they became one. This liquid mass was blending with her body, with her soul and mind. And now she would be unstoppable. A fairy, a goddess, a legend for thousands of years to come. She was no more Estella; she was The Essence.

Her story survived and she became the miracle of grief, the transformation of sadness. Every tortured soul would bow to her powers as she was presenting herself to them, teaching them how to be humans and how to accept their solitude and deep sadness. She would go around the world spreading the words of her soul, teaching, transforming people’s lives, but maintaining her modesty. People worshiped her, but she knew that every time she would prevail in one’s soul, she should retire back to her cave. That’s where she lived for years, till one day she met this one person to whom she decided to tell her story. He was a painter and a writer and he was fascinated by her presence. He wasn’t the only one of course, but this time she was fascinated by his presence too. They created a special bond and decided to spread her story everywhere, but only after her death. She didn’t care about material things. She didn’t want people to bow her unconditionally. She just wanted to show them how they can also be transformed, how they can also change their destiny and discover their true purpose through kindness and love.

So there I was, standing in front of this painting, watching at her surrealistic figures. The artist decided to depict this earthly goddess so effortlessly, I couldn’t stop thinking about her story and how people fail to believe in it. About how she would really look like, after that terrible accident, and how long she must have suffered after she lost everything. And how did she emerged as a fairy that everyone would honor till the end of time. Maybe it was indeed centuries till she rose from that ground. Maybe indeed all the animals stayed next to her, consoling her tormented soul till they also disappeared through time. We will never know. They only thing I know for sure is that this girl’s strength is the reason why I am here. You see, I am her one and only fleshy creation, the fruit of her love, the essence of her existence. I am her only child.