The alarm didn’t go off and I am late. Really late. The suitcases are not ready at all and it is already 9 o’clock. No time for coffee or breakfast. Everything needs to be packed and off you go. “Get ready and go!” is the only thought buzzing in my head right now. But I am tired and drowsy. I can barely move. However, the bus is still traveling to Italy and I still need to pack for a wedding. Outside of the room I scream at my mother. Why is she here anyway? Isn’t she supposed to… “Your suitcase is ready, so are your papers and ticket” she says, standing at the door, obviously tired of me being late every single time. I sweetly thank her, grabbing my suitcase and running franticly towards the bus station.

The trip is scheduled to last more than 25 hours and I am not ready for that. In my pocket I hear the cash money getting intimate with my keys. Will that money be enough? Which keys am I carrying either way? Arriving at the bus station, I see a big line of people waiting to buy a ticket. I can hear my heart pumping in my head. This is not good. Maybe if I scream then everybody will freak out and make room for the crazy one to pass. This sounds like a great idea. But not today. I wait patiently till the moment I feel excruciating pain on my foot. A heavy guy has just stepped on me. This is going fantastic! An awkward, loud laugh comes out of my mouth. Silence. No one turns to look at me. That is weird. I silently cross my fingers for everything to turn out ok.

Suddenly I remember I haven’t bought any gifts. My best friend is getting married and me, an organization freak, have forgotten to buy a present. Great. I skip the line for the bus and run to the nearest patisserie. A nice fellow sitting behind the counter smiles at me, while packing a cake. There are still nice people on earth. While heading back to the bus line I realize I have actually forgotten my suitcase. How is this now possible? Didn’t I just have it with me? It is big, blue and noticeable. Is it stolen? Where is it? No, no it is still in the room, STILL IN THE ROOM. I look at the clock above the counter and realize I only have 10 minutes. How am I supposed to do so many things in such a short time? My mind is raving around the fact that this is not the first time I do this. How can I be so unprepared for such a big trip? My heartbeat has reached my mouth, my legs are shaking and my hands are freezing cold. I feel warm, burning tears coming out of my eyes. My biggest fear is coming true. My biggest fear is coming true. I put my cold hands towards my forehead and realize I am sweating. I feel like fainting. Everything is hazy and dark. No more ticket lines, clocks, suitcases or trips. The next thing I know I am laying on my bed, sweating heavily on my pillow.

I open my eyes and look outside the window. I am home in the Netherlands, having a nightmare. On my attempt to recover from this dream, I am trying to think really hard whether I have or not a trip planned. These recurrent nightmares had started the moment I left my country. Always with the same feeling of missing a plane, a bus, a trip. This fear of being late and missing a scheduled trip has become a serious reason for me to spent my nights struggling with my own thoughts. I soon recover and reassure myself that this happens because of my constant traveling between homes; the one I grew up in and the one I built here. I stand up, make coffee and gaze outside at the rainy weather when my phone rings. “Where are you?” a voice screams in my ear. “I am home, drinking some coffee. I had one of those nightmares again, it was so real!” I say laughing at my own fear. “Your plane is leaving in 30 minutes”, the voice responds worried and I realize my biggest fear has indeed come true. 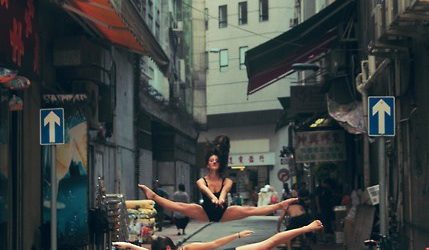 They were there. Dancing in the cold streets of this big city. They were there, focused on their postures. Cold but together. They had dancing, the city, each other. Esther always liked Anna during their dance training in school. They were almost the same, in character and in appearance. Long, soft bodies with dark, long, black hair. The first time they met they were both fresh year students and quite scared of the other experienced ones. They thought they would fail from the first semester and soon they would be sent back to their homes. Places they hated and both promised to themselves never to return to. They both were not aware of how similar they were with each other.

One night, during their first semester, they met accidentally in the laundry room of their building, where both were going to wash their clothes. Oddly enough, none of them realized how close they were living to each other. They recognized each other’s faces immediately. They have seen each other in class before, right? Anna walked towards Esther in a slow and insecure way, but also with some excitement, determined to create something new. Yes, they both have spotted each other from the first days in school, but they never exchanged anything further than a usual greeting. However, both of them knew how they felt from the very first moment they laid eyes to each other. Strong, unidentified feelings. So, that night at the laundry, Anna took the big decision to talk to Esther. “Do not overthink about it girl, just do it”, she said to herself, as soon as she saw Esther entering the laundry room. “Hi, I am Anna. I think we are in the same classes in school”, said Anna quite determined. “Yes I know” replied Esther.

From that moment on they knew. They became inseparable. They were going everywhere together. Their souls unraveled and danced along without any interruptions. They spent hours talking and sharing, practicing their “secret” dance moves and exploring every possible new ones. They were so alike. How could that be? How could they miss each other for so long? The late nights they spent dancing and dancing all over again, combining their talents, would prove something more than they both have imagined. It would prove that they finally have made it. They both made it to the school’s finest of dancers and were offered by their department a full scholarship. Now they could conquer everything. Through their hard work the lives they were dreaming could finally become true.

Being popular was also achieved, almost overnight. They now had to prepare for the last show of the season, a duet with dancing parts of traditional ballet combined with modern pieces. People were talking about them. “The twins”, they would say and the girls wouldn’t bother. They were made for each other and yes they were looking almost exactly the same. In a period of only six months, those two lonely girls became from nobodies to someones, but together as a whole. Could it really be?

A phone call came late at night on a Friday. They were both tired from practicing and it was time to relax. But the call changed everything. It was a man from a Broadway theater. Broadway! He called Anna and asked for a meeting. Alone. He liked her temperament he said. Esther was too flat. When she heard it she protested. How could it be? She couldn’t go alone. What about Esther? They were a team, an inseparable duet. No way that would happen. Esther was devastated. All this hard work and now they want Anna alone? What was she doing wrong? Could it be that Anna was using her after all? That day in the laundry place, could it be that she was planning to use her in order to promote herself? Through their indisputable resemblance and common talent?

Doubt was planted now in Esther’s heart. What she shared with Anna was suddenly demolished. That phone call did change everything, especially for Esther. It opened her eyes. Yes. Blind all along. Stupid Esther. How could she fall for that? How could she be so ignorant? The next morning Anna tried to convince Esther that she knew nothing about it, but it was too late. The safety they built in each other’s company was now gone. But maybe it wasn’t safety at all and what Esther felt was all an illusion. But they still have to practice, added Anna, shaking Esther out of her thoughts. “So that is what she really cares after all”, thought Esther. The stupid dances and herself! Unbelievable. She didn’t even try harder.

But the decisions where already made. Ego appeared menacingly and was now threatening them roughly. They were blocking each other, they were killing each other. They both let doubt eat their beautiful companionship. Their egos grew enormously and they couldn’t think straight. Just a word could have saved everything. Just a smile or an apology could do so much. But no. Silence and dangerous thoughts overtook their hearts. All of this for nothing. All of this for the life they could actually share and now they are both throwing away. The ignorance of youth. How destructive.

She stares at that window all day. She dares.
Through its broken frame, she stares. Then she dares to fear.
She dreams.
Above the concrete and the clouds, she dares to dream.
She screams. Into the shadows of herself, below that window she grows.
She stares. She dares to scream out loud.
No voice echoes.
The power of those walls. Empty and silent. Like her dreams.
In that room she dares; to talk and crouch upon an ego.
Those dreams.
Scattered in all the corners of those rooms.
She fears.
Of the life she cannot dream. Of the life she hasn’t dared to fear.
All those years.
The years to come.
In the beauty of loneliness, she dares. When she dares she dreams.
When she stares she fears.
And then I saw a smile upon her face.