He is one of the most famous and most loved American filmmakers of his generation. His movies have inspired many and his distinctive personal style has shaped attitudes and modes throughout the years.

If you don’t know it already, the Eye Film Museum in Amsterdam has been hosting Scorsese’s exhibition since last May. With an immense personal collection (Scorsese’s and De Niro’s) of objects (over 400), memorabilia, awards, documents, photographs, and a compilation of film fragments, this exhibition guides you through the beginning of Scorsese’s inspirations and his life work with care and great self-awareness.

The exhibition is wisely divided according to the general themes of Scorsese’s films and inspirations. The main ones are family, heroes, brothers, relationships between men and women and are the most intense and descriptive ones throughout the exhibition. They include many key film fragments that are projected on large screens, but also photographs, small video fragments, objects and storyboards that show how and why Scorsese chose those themes in his work. Evidently, this part is very interesting and powerful, representing consistently the key inspirations and film subjects Scorsese utilized the most.

After those sections, the least important ones follow, such as editing, camerawork, cinephile and music. The section of New York is perhaps the one that almost every guest feels the need to explore a little bit further. There are clips, many film objects exhibited and even a giant wall poster with a yellow neon Mean Streets sign and Travis Bickle’s wonderings in Times Square. Here, you can take the well-deserved selfie.

The exhibition covers successfully the whole spectrum of Scorsese’s filmic career and focuses on his early and most acclaimed work. Taxi Driver, Mean Streets and Raging Bull are perhaps the most present films in this exhibition that reappear in many sections and the ones that made Scorsese famous for his glorified view on violence. The Wolf of Wall Street and The Aviator are also some of the films you will see a lot, however, not much is shown from Gangs of New York or Hugo. Nevertheless, the small screens hanging in every corner include clips from almost all his films. You also get the chance to witness his early student work and his documentaries about New York and his Italian-American family that are not so famous. While you enjoy his vast and diverse filmic work, much of his personal stimuli and inspirations prove vital for the full experience of this exhibition. You will discover the incidents and events that shaped young Martin and the ways he conceived his filmic ideas. 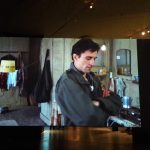 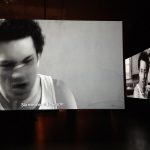 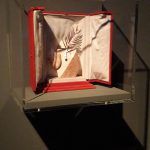 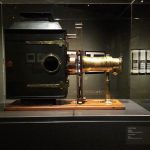 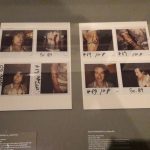 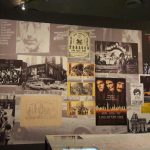 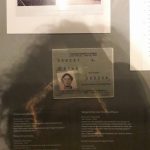 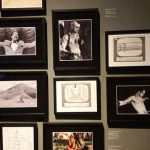 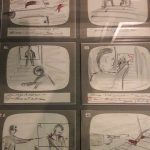 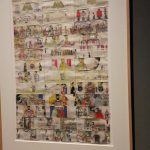 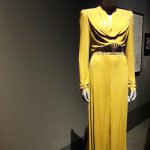 Cate Blanchett’s dress in The Aviator 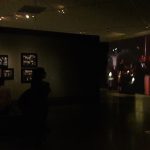 His style and touch are present everywhere in the exhibition, which makes everything more personal and somehow more accessible. For this reason, in many parts of this exhibition you hear Scorsese’s own voice narrating a story accompanied by an old movie fragment that functioned as an inspiration. Those clips are short and create the strange feeling that he is there with you, guiding you through what you see. The exhibition knows what it’s offering and how to present it and the director’s guidance creates intimacy, while you stroll around watching, hearing, touching and reading everything he ever made or loved.

Scorsese recognizes his own importance and has created an inspiring and honest exhibition for anyone, either a young filmmaker, a cinephile, or a fan. The exhibition is a personal journey on the director’s work and inspiration that helps you realize his importance, contribution and influence on cinema. The exhibition succeeds that by showing everything in a truthful and simple manner.

While walking through the exhibition – which takes approximately 2 hours – you feel this raw and rough sensation overcoming you, which is soon replaced by a familiar sense that you have been inside Scorsese’s brain. Not because you visually witness his work and life in front of you, but because he allows you to.  And that is a luxury you can’t say no to. Additional information: Every written text of the exhibition is offered in English and Dutch, and is at times overwhelming. Nevertheless, it accompanies the visual part quite effectively. Except for the exhibition, you can watch many of Scorsese’s films in the museum’s screening rooms, but also some of his personal favorites. Check the full calendar here.

How to get there: from the Amsterdam train station, you walk towards the back of the station, you reach the port, and you get one of the ferries that depart frequently. They are for free.

Prices: a full price is 13 euros, a reduced 11.5 euros and if you own a Museumkaart it costs 3 euros extra. Book them here.

The exhibition starts at 10 am and is open till 7pm. The film screenings are till 10pm. For more information, visit the Eye Film Museum website. If you book tickets online, you avoid the queues in the entrance of the museum.

(Photographs are taken with a Samsung phone, that is why the quality is poor)